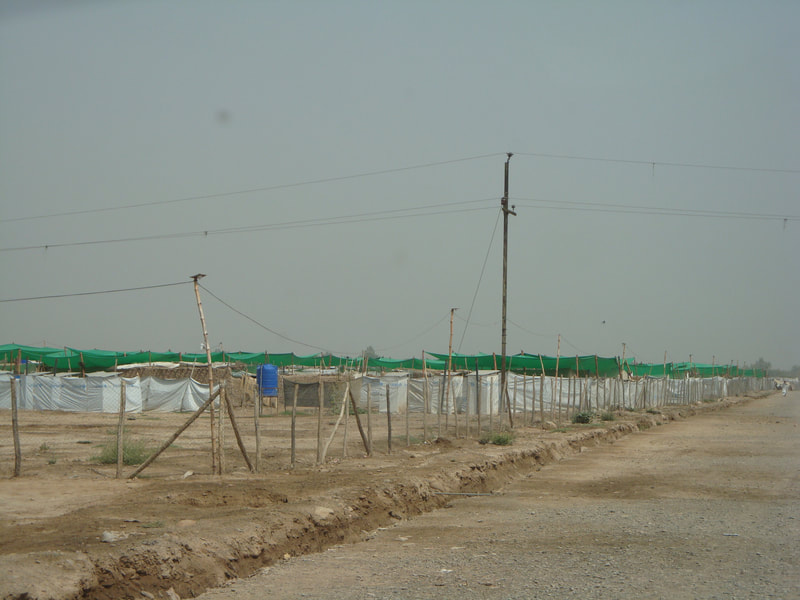 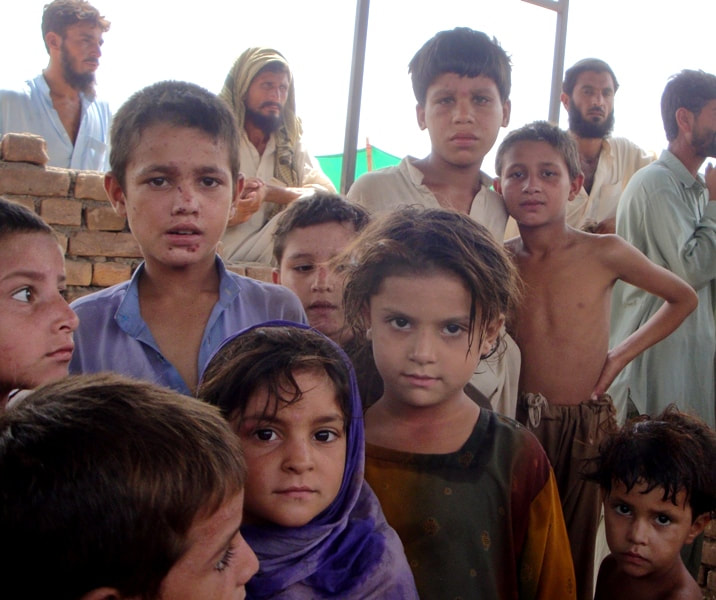 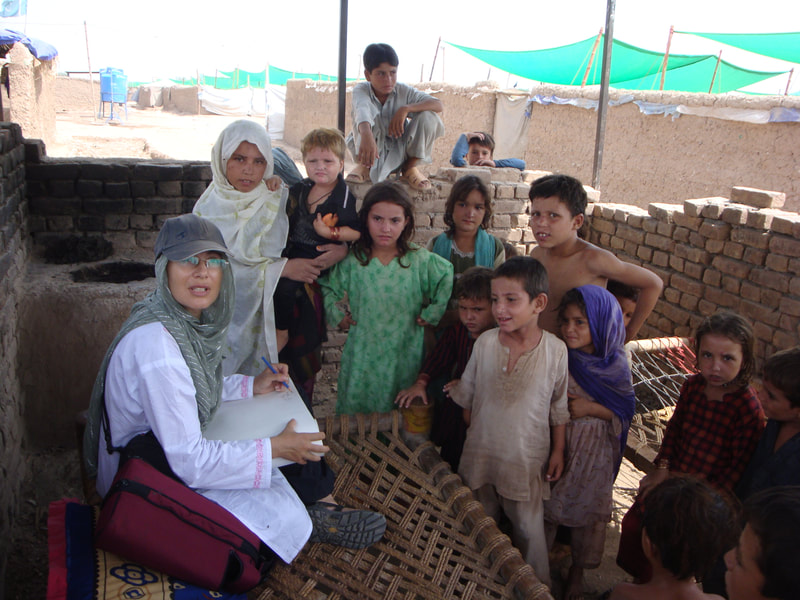 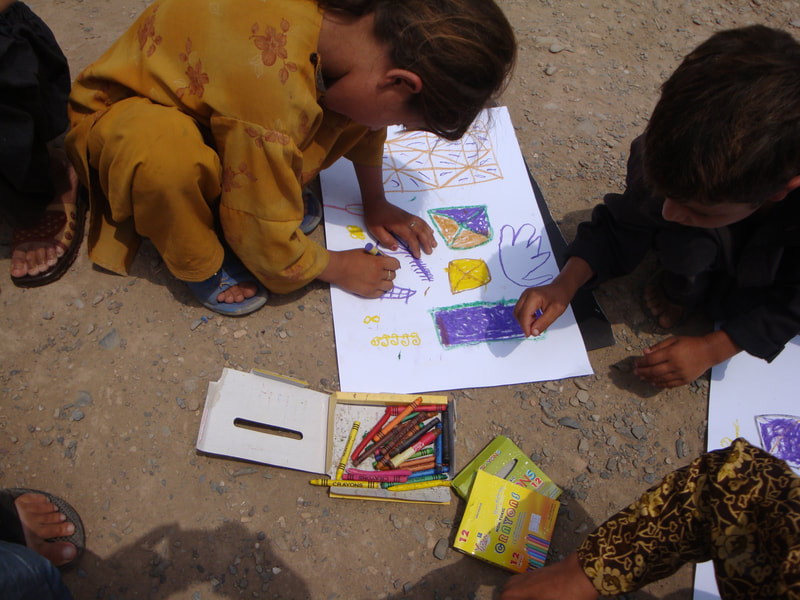 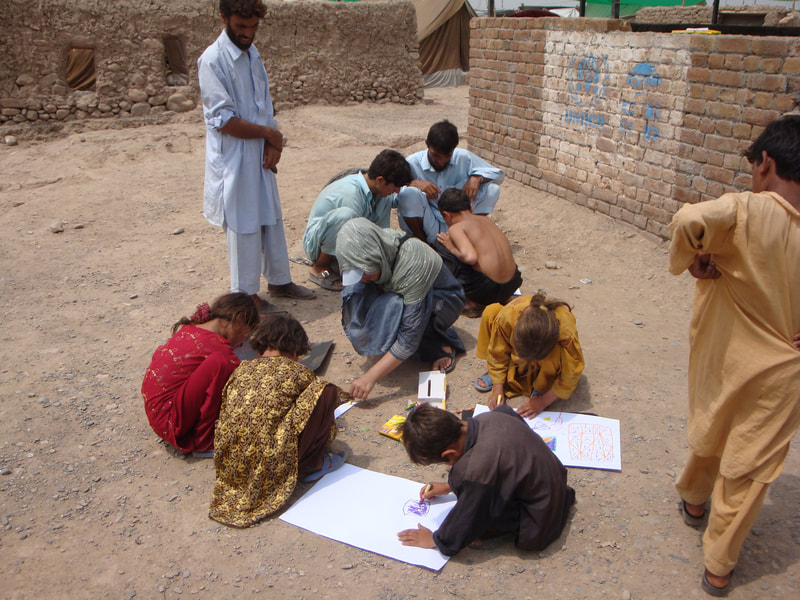 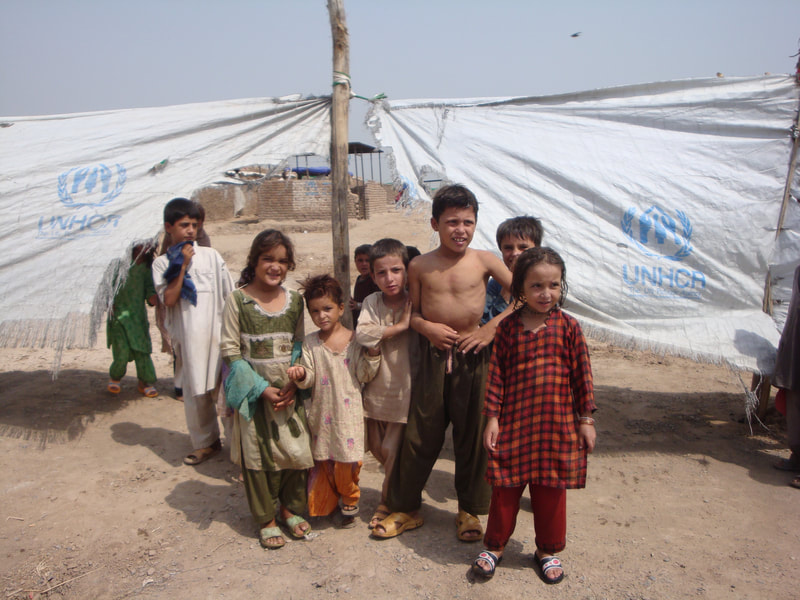 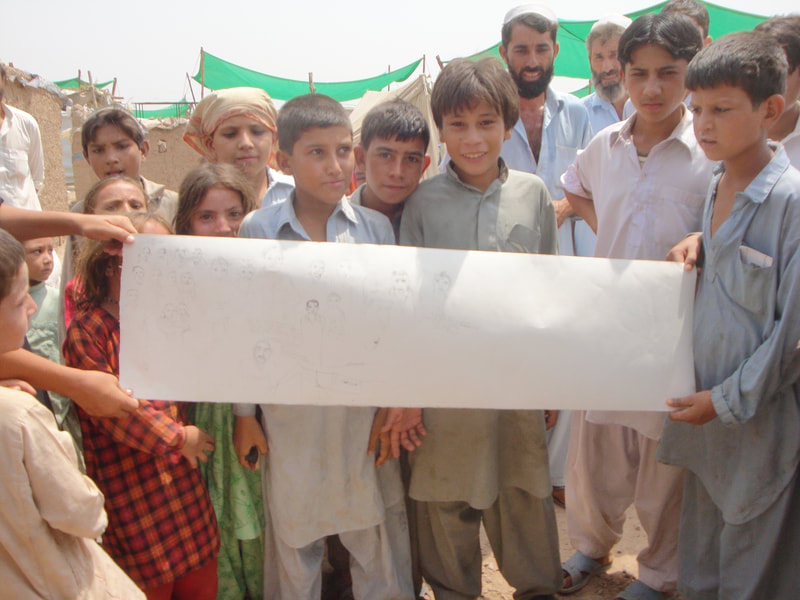 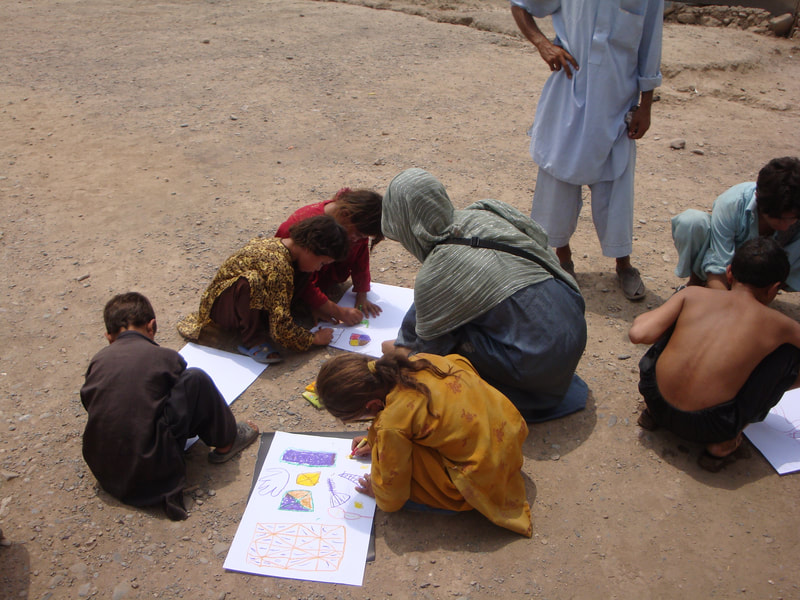 ​In 2009 the US lead drone attacks on the tribal areas bordering Pakistan and in the province of Swat, supposed to drive out Taliban cells, instead killed and terrorised thousands of civilians. Fleeing their destroyed villages, seventy thousand refugees from the tribal areas came to be contained in Camp Kachagari, on the outskirts of Peshawar.

I had come to Pakistan for study in miniature painting at the National College of Art in Lahore. When I heard about the attacks I didn't want to sit in a studio, I wanted to go to the camps, and offer something in my capacity as an artist. I put up a sign at the college asking for donations of paper and crayons. I called the Human Rights Commission of Pakistan. Obtaining permission to enter a camp was not easy but I got it and visited Camp Kachagari where I began having workshops for children. Conditions in the campe were harsh. Peshawar has green and shaded golf courses and public parks but the refugee camp had been created outside the city on land that looked like a desert. It was summer and in the camp it was over fifty degrees. Used to the cooler mountain climates, the refugees suffered with heat rashes and boils. There was scarcity of water. There was no school, nothing in fact for the children to do.
​
I wondered why conditions in the camp were so poor because aid pouring in both from outside and inside Pakistan, until I learned about the internal politics governing its distribution. Unlike refugees from Swat, the tribal refugees received no assistance. When Pakistan the nation was declared in 1947, the tribes bordering Afghanistan chose semi-autonomy in light of their ethnicity and disproportionate representation in the predominantly Punjabi-led government. Winning the right to exercise a form of power in their own villages however came at the cost of accessing state welfare and emergency assistance. For many Pakistanis, the tribes were seen as having surrendered Pakistani identity. So when the drones came, refugees from Swat received aid and billeting in villages across Khyber Pashtunistan but refugees from the tribal areas were herded into no-man's land-style camps like Kachagari.

Lost Swat scroll came about during the workshops in Camp Kachagari as children came and sat for portraits. They were so hungry for drawing that hours after the grownups had fallen back into the tents they were still sitting making pictures. The crayons were melting in the sun as they made them. Some children drew images of bombed villages, drones, and wounded people. Others drew patterns, flowers, the memory of homes, rivers, and families.

Unfortunately after three days of workshops my permit to the camp was cancelled. At the Human Rights commission they told me that it was probably because I was witnessing conditions that officials would rather conceal. After this I went to a the village of a friend whose family were billeting Swat refugees outside Mardan. These people and their children collaborated with me further on the scroll. A twelve year old boy wrote the following poem:

Your hujras, the guest compounds, are empty.
The people of your village, they don't know where they are.
All your luggage, your belongings are on your head and shoulders.
All the elders who saw your village in the making are just sitting perplexed.
All of the children are crying.
Oh remember that spring, that canal bank?
Everything has lost its inhabitants.
Oh remember that midnight, that universe of stars.
Everything is quiet in our village.
​ 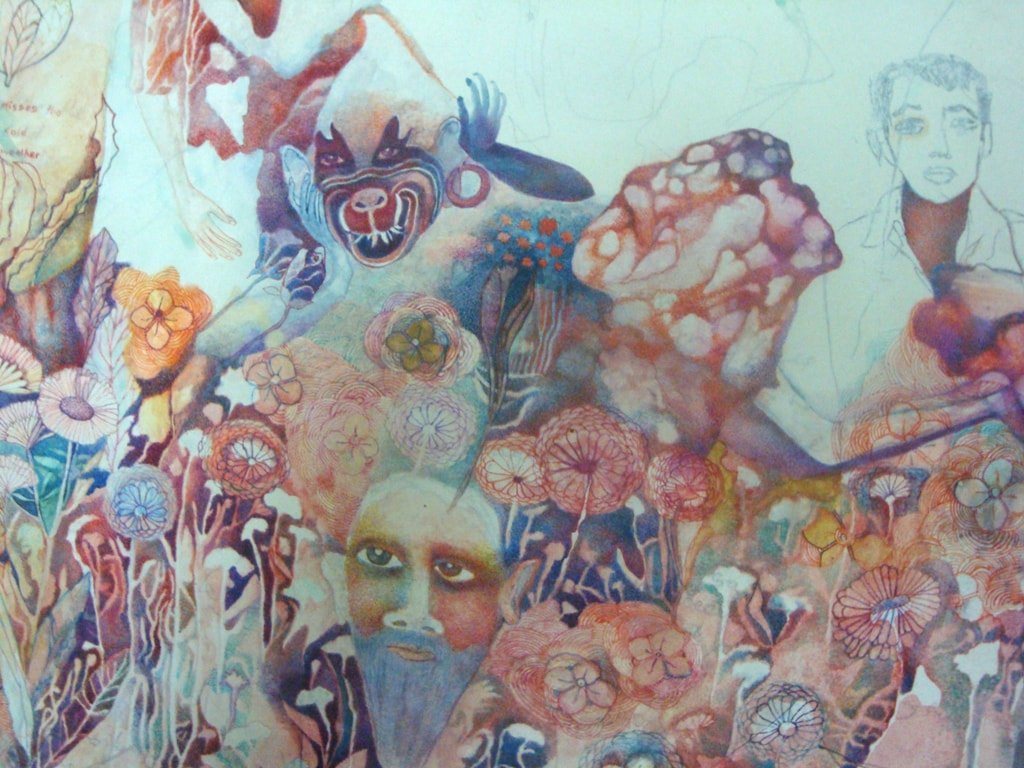 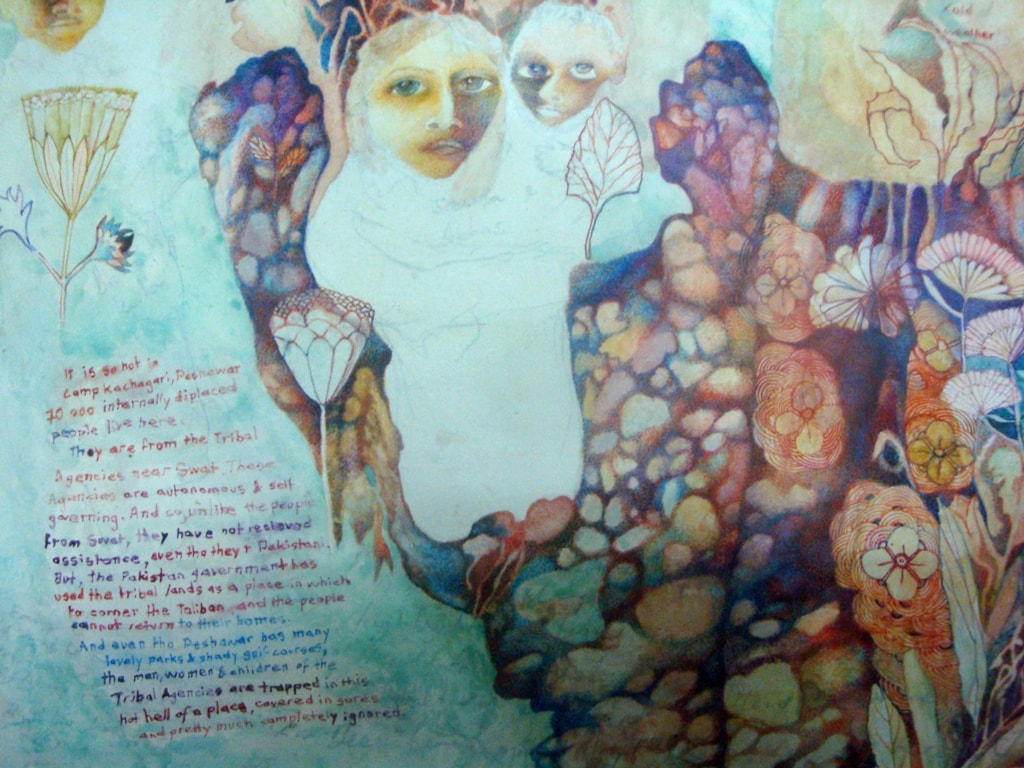 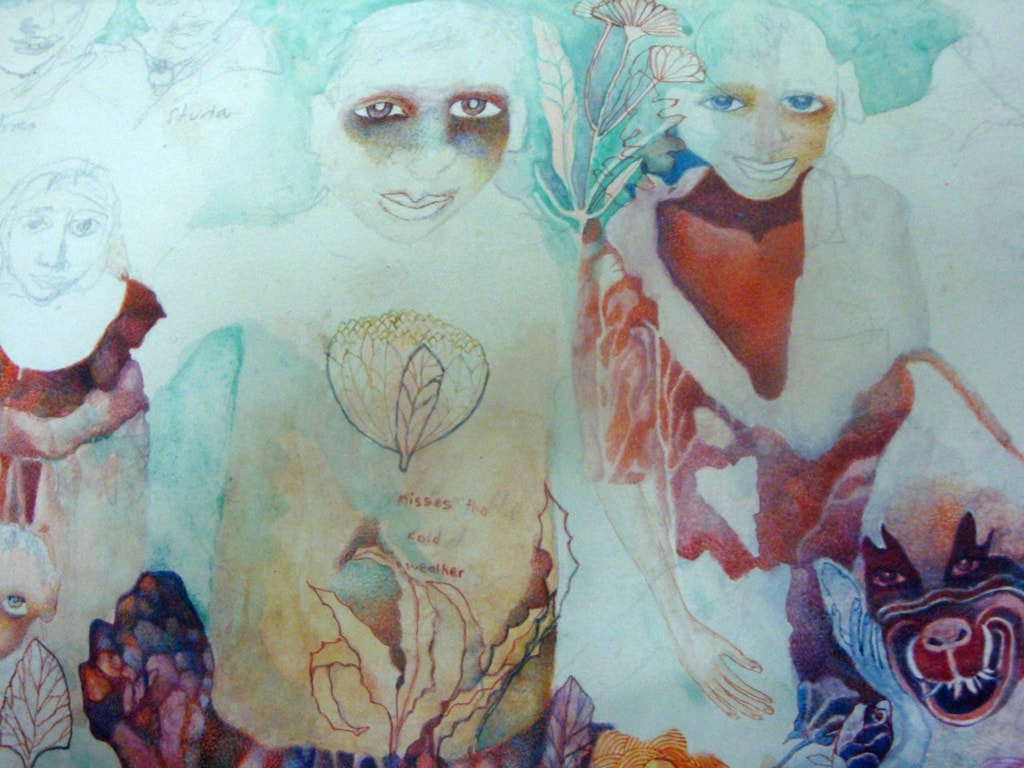 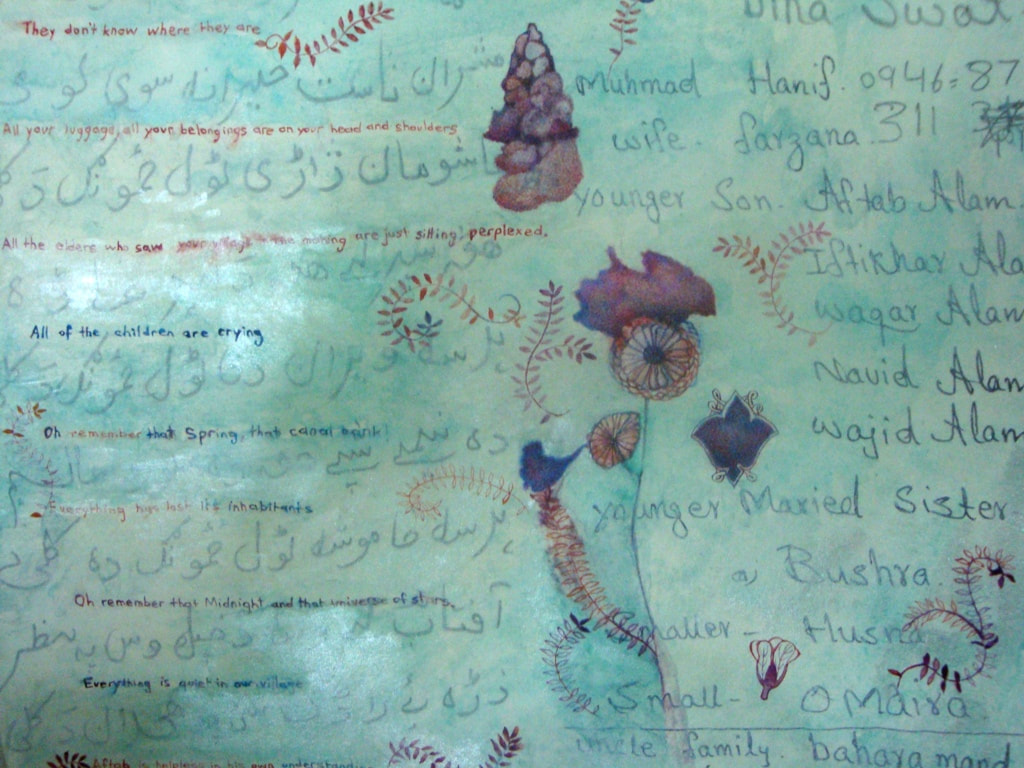 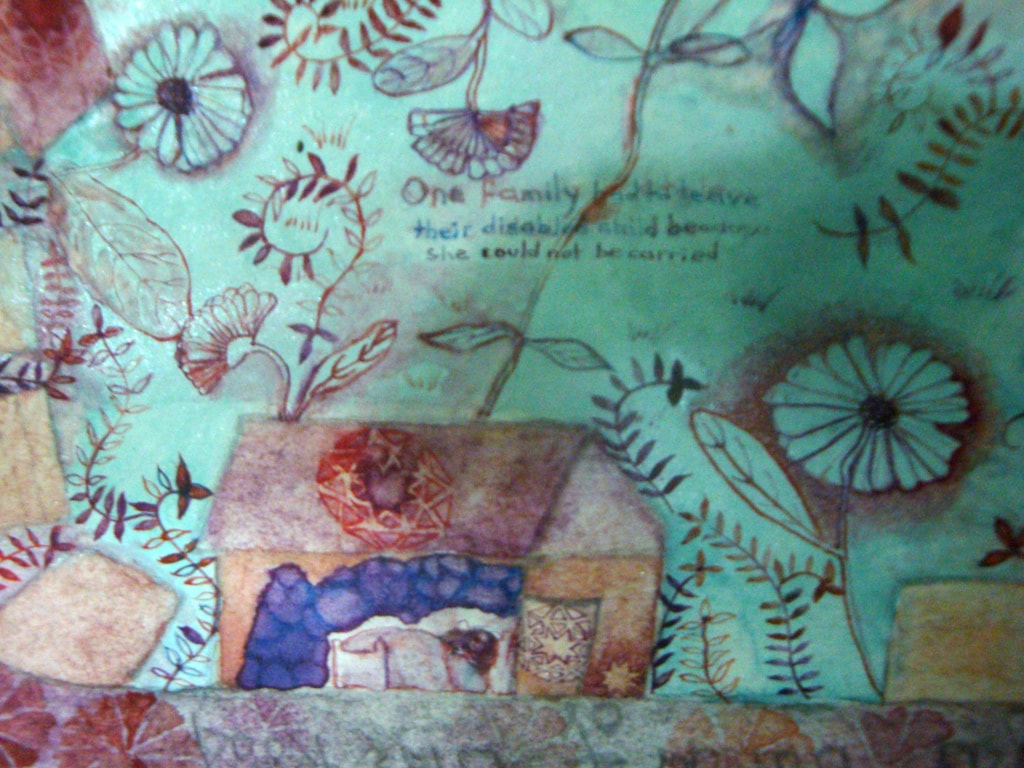 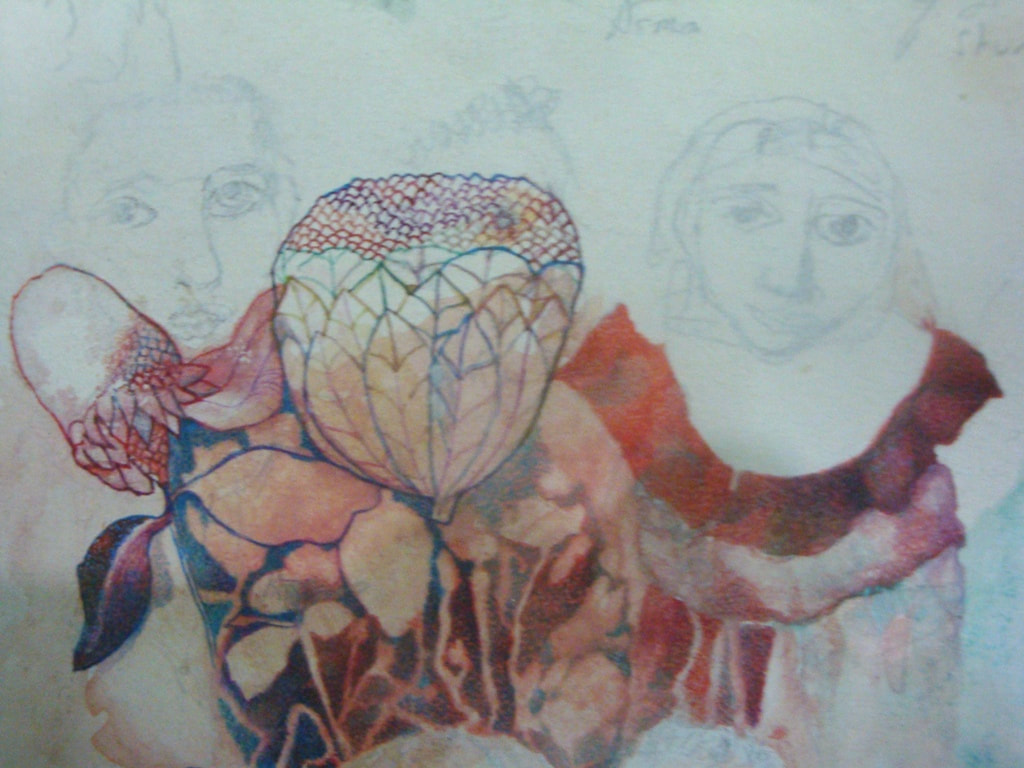 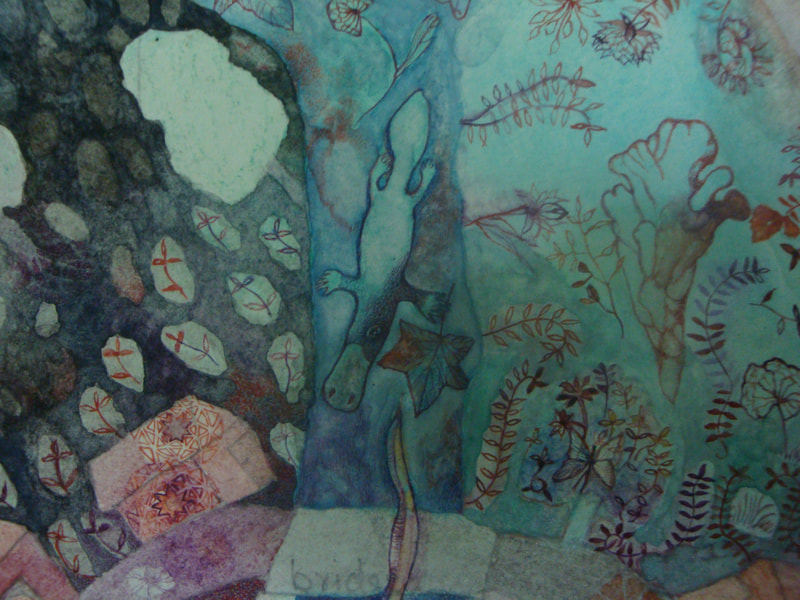